Lamborghini is 50-years old and the Gallardo is 10-years old. After many patient years, Auto Italiana finally gets to drive a raging bull.

“Steady on lad!” I and two other journalists have only just arrived at our accommodation in Mphumalanga and I’m already clamouring around the three Lamborghini Gallardo’s like a meth addict to a glittery, crystal chandelier. There’s a very good reason for this. You see, my brain has had nine years’ worth of synapse-manipulation to the sight and sound of the Lamborghini Gallardo. Videos, YouTube, books, magazine articles, I know so much about this car I’ve started to forget things. Now I get to drive not one but three of them.
Assembled in the parking lot are a Gallardo LP560-4 Spyder, a Gallardo LP560-4 Coupe with a Signature Series body kit on it and finally a top-dog Gallardo LP570-4 Performante Spyder. The latter is effectively the Spyder equivalent of the LP570-4 Superleggera Coupe. Got it? Good. 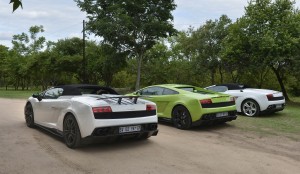 What’s clear is that these cars are for people with extraordinary taste. As expensive, aggressive and old as these cars may be now, they are nevertheless Italian and exotic. What does the script hold in store for my story? Am I going to love them just as much as I’d imagined I would, or will I realise I’ve been fruitlessly chasing a dream and they’re over-hyped and over the hill?
Regardless of the outcome, what I do notice straight-off-the-bat as they sit in the hotel car park is the rakish roofline (probably no higher than hip height when you stand next to it), the stubby frontend with its highbrow headlights and the sporty skirting’s on the Signature Series and Performante. What a couple of lookers this trio are. It’s like looking at Heidi, Claudia and that other one. The standard car even looks a little bit elegant and understated against the aggression of its winged, ducted and shouty companions. From the rear end the Performante has a fixed carbon-fibre wing that is just pure perfection to a bloke like me and peering out from underneath the rear diffuser is the bottom of the rear-mounted gearbox. This again, is suggestive, sexy, and a bit like catching sight of a supermodels G-string. It makes you feel all naughty somehow.

When you climb down into the cabin you’re immediately taken by the lowness of the dashboard and the car as a whole. It feels athletic, like you’re virtually lying flat on your back with the stretched lines of the controls and the front of the car coming at you at speed; this is before you’ve even set off. The interior is a substantial mix of suede leather, carbon-fibre and it has to be said, Audi switch gear for the climate control and Sat-Nav controls. All the vehicles were fitted with Lamborghini’s E-Gear, two-peddle transmission, so two paddles are found sprouting out from behind the steering wheel, as if begging for your full attention. All in good time, sir.

There is enough reach and height adjustment on the steering wheel to make the driver of a Gallardo feel like a Nascar-veteran with the wheel able to reach out just inches from your chest. The handbrake is massive as well, taking up almost all the space afforded above the transmission tunnel. It has to be He-Man’s car, it just has to be.
Then you fire the 5.2-litre V10 up with a vicious, raucous blast accompanying the occasion, before it settles down into a deep, idling burble. You engage first gear with the right-hand paddle and you ease open the throttle carefully. You sense this is a car with a very, very big engine straight away, you also feel the mechanical losses when moving around at low speed from the viscous, centre-coupling that distributes power to all four wheels. You hear the sounds of a machine clunking, melding together and heating up for the tasks that lie ahead. It’s a proper machine this car, not a self-involved bag of electronics like you get from those other Italians.
The gearbox takes some getting used to in the way it is meant to be used with the paddles and not with the sensible ‘auto’ mode as its default. Auto mode is kind-of a last resort for if both your arms have been cut-off in a chainsaw accident. That’s how it feels as well, jerky and slow. This incidentally is also exactly what the Lamborghini’s V10 engine sounds like – the Mphumalanga Chainsaw Massacre. 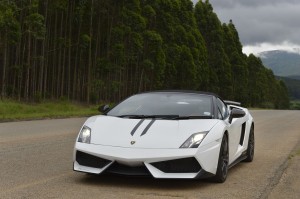 Well outside the confines of Mphumalanga’s sleepy towns we can finally open the beast up a bit. With a few flicks down on the left-hand paddle the revs rise above 4 000 rpm and the exhaust noise goes bonkers. It really is a switch, on or off at 4 000 rpm = chainsaw massacre soundtrack. The gearbox is much better at speed. Really, it is. It even shifts quite convincingly on its own when it touches the red-line. The steering feel is heavy and absolutely confidence inspiring as a result. The drive, the atmosphere, as you thunder along in a Lamborghini Gallardo is also intoxicating because in the back of your mind you know there isn’t a wall of electronics flattering you, making you feel like Fernando Alonso
.
When you accelerate, 30% of the power is sent to the front, the rest to the back and you’re left to your own devices. The Gallardo has great natural levels of grip and great body rigidity to keep you dancing hard and true over road imperfections. It’s perhaps a little bit on the soft side as far as spring rates are concerned so there is slightly more roll in the fast corners than you might’ve expected but it is also surprisingly comfortable as a result. With the suspension compliance becoming more comfortable the faster you go as well. The massive front and 295-wide rear section tyres are also surprisingly good at floating over the occasional Mphumalanga pothole unscathed. The tyres are so wide they don’t ever actually go in the holes. Bonus!
The best part of the Gallardo is how it looks. No, it’s how it sounds. Then of course there is the power it produces. The LP560-4’s pump out 412 kW and 540 Nm of torque and the LP570-4 Performante makes a bit more power at 419 kW and the same amount of torque. That puts the 0 – 100 km/h sprint down to less than 4-seconds for all of them, before you top out at a speed in excess of 320 km/h.
With my expectations barely in check, I didn’t know what I would make of finally driving the Lamborghini Gallardo after nine years of it being in production. What I can confirm for you is the following: Yes, the gearbox is less than perfect. No, aside from some buttons it does not just feel like a big, expensive Audi R8. Yes, other Italian and British supercars are more hi-tech. And finally, yes, none of that matters one iota when you put your foot down and you make that V10 bellow like an animal. The script was never in doubt, not even for a second. It’s a bloody Lamborghini for goodness sake. It is every inch the car it was always going to be. 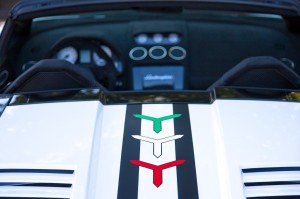