May 13 is Alfa Romeo Day

Remember to celebrate 13 May. This is the day in 1950 when the first modern Formula 1 race was run on the Silverstone race track in the UK and won by the Alfa Romeo 158 driven by Giuseppe Farina. The Alfa Romeo 158/159, also known as the Alfetta (Little Alfa in Italian), is a Grand Prix racing car produced by Italian manufacturer Alfa Romeo.

It is one of the most successful racing cars ever produced- the 158 and its derivative, the 159, took 47 wins from 54 Grands Prix entered. It was originally developed for the pre-World War II voiturette formula (1937) and has a 1.5-litre straight-8 supercharged engine. Following World War II, the car was eligible for the new Formula One introduced in 1947. In the hands of drivers such as Nino Farina, Juan-Manuel Fangio and Luigi Fagioli, it dominated the first two seasons of the World Championship of Drivers.

The car won every race in which it competed during that first season of Formula One in 1950; it was incredible that a car which had originated in 1938 was so victorious, most likely because all the other constructors (as few as there were) had less money to build and develop their cars and the Alfa had so much development time. The Alfa Romeo team included talented drivers such as Giuseppe Farina and Juan Manuel Fangio, the latter of whom later won the World Drivers’ Championship five times.

After World War II, auto racing’s popularity dimmed in the shadow of the continent’s rebuilding. It wasn’t until 1950 that racing organizers finally held a long-sought world’s championship series of Formula 1 races, which would result in a true champion. The first race was held on 13 May 1950 at the Silverstone track in England, where four Alfa Romeos ran away from the field. 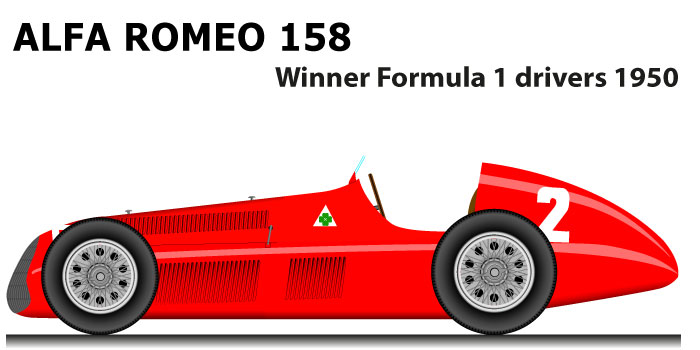 The inaugural World Championship of Drivers saw Alfa Romeo dominate with their supercharged 158, a well-developed pre-war design which debuted in 1938; this car won all six championship Grands Prix in 1950. All of the Formula One regulated races in the championship were run in Europe. The Indianapolis 500 (which, unlike all the other races, was staged on an oval) was run to American AAA regulations, not to FIA Formula One regulations and none of the regular drivers who competed in Europe competed in the 500, and vice versa. Alfa Romeo drivers consequently dominated the championship with Italian Giuseppe “Nino” Farina edging out Argentine teammate Juan Manuel Fangio by virtue of his fourth place in Belgium. Although the Indianapolis 500, which ran to different regulations, was included in the World Championship each year from 1950 to 1960, it attracted very little European participation and, conversely, very few American Indianapolis drivers entered any Grands Prix.

Championship points were awarded to the top five finishers in each race on an 8, 6, 4, 3, 2 basis. One point was awarded for the fastest lap of each race. Points for shared drives were divided equally between the drivers, regardless of how many laps each driver completed during the race. Only the best four results from the seven races could be retained by each driver for World Championship classification.